Race for the Premier League top 4 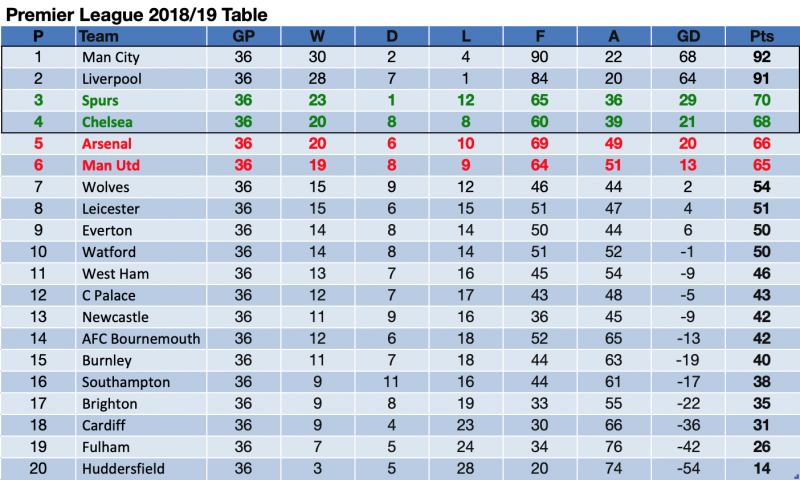 Four into two doesn't go but something will have to give between Tottenham, Chelsea, Arsenal and Manchester United as they try to qualify for the Champions League, with two of them set for disappointment. Which clubs will it be and who is more likely to make the top four?

We already know of course that two places have been secured in the form of Manchester City and Liverpool who have been on a different level in the Premier League to the rest of the clubs this season. There is also another story concerning Chelsea and Arsenal - if they fail to make the top four, they get another chance in the Europa League. Both have made the semi-finals and could play each other in the final. Whoever wins not only picks up one of the biggest trophies in world football, but they also qualify for next seasons Champions League. Chelsea are the 2.38 favourites to win the competition and Arsenal can be backed at 3.25.

But back to the Premier League and let's see how the remaining fixtures could go. First we will start with Tottenham, in 3rd place with 70 points Mauricio Pochettino's side look the favourites to finish in the top 4. Tottenham are unbackable at odds of 1/20 to finish in the top four. They have a 2 point advantage over Chelsea and a four point safety gap to 5th place and Arsenal. Tottenham will play Bournemouth away and then Everton at home. They should at least get 3 points from those matches and finish on 73. However there is a risk associated with the club as in between those fixtures they will be playing their 2nd leg Champions League game against Ajax, which could prove to be a distraction.

Chelsea have crept into 4th place after it seemed they would fall to 6th. But Arsenal and Manchester United have both found poor form at the wrong time. The Blues have 68 points and their last match ended in a 1-1 draw with United. Chelsea do have the Europa League on their minds and that will be tough for the team to focus also on the Premier League and not be fatigued. A key game will be when they play Watford at home this weekend, if they win that they have a great chance for a top 4 place. Their final game of the season is against Leicester away from home, which looks very tricky on paper. Chelsea could finish with 71 points at least and they are priced up at 1.40 to make the top 4.

Arsenal have chosen the worst period of their league campaign to find poor form and have lost their last 3 games in a row. It seems that they might be putting all of their eggs in one Europa League basket in order to play Champions League football. First they need to get past Valencia and that will be a very difficult two legs. The Gunners have slipped to 5th place and are 2 points behind 4th place and Chelsea. Arsenal will play Brighton at the weekend and they are at home, on paper this should be a straightforward victory but form has been out of sorts. They finish the season with an away game against Burnley who have been fantastic as the season has rolled in. Arsenal could get 4 points at a big push, but they would need to win their last 2 games to have any chance of a top 4 and hope that Chelsea mess up. Arsenal are 3.00 to finish in the top 4.

Manchester United are currently 6th and have no Europa League lifeline and they looked doomed not to make the top 4. They have 65 points and in not beating Chelsea in midweek that seems to have sealed their fate for next seasons Champions League. They will play Huddersfield and Cardiff and they can realistically win both of those games and finish on 71 points. But ultimately even if the teams above drop points goal difference will take effect and it looks unlikely that United will finish in the top 4. If you think they will you can back them at 11.00.

In conclusion, the bookies look to have this one right as 3rd and 4th positions look like they will be going in Tottenham and Chelsea's direction.