Has Cheating in Football Become Acceptable? 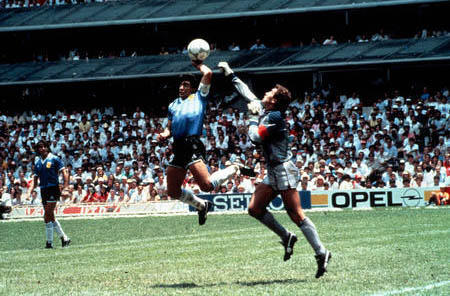 Cheating - a word that everyone hates, especially when it is associated to football, but all forms of cheating have gone on in the game since a first ball was kicked professionally in 1872.

Sometimes it has been blatant, Diego Maradona's hand of God goal or Harold Schumacher's Bruce Lee kick on Patrick Battison when Germany played France at the 1982 World Cup, in both cases the players benefited from what they did and didn't even get booked. Whilst we can criticise VAR all we want this season, it would certainly have taken Maradona's goal against England away and Schumacher would have been sent off no question.

Those are extreme examples of cheating in the game and we could well write a few books on the subject. However the most effective cheating so to speak are the subtle examples, the ones that are actually quite shrewd and mostly go unnoticed, unless you are counting down the time and it is your team losing. It's this type of cheating that appears to be so much a part of the modern game that many just see it as normal and acceptable behaviour. So what are these shrewd and largely ignored examples of cheating, and is there anything that can be done to stamp it out of the beautiful game?

Although not strictly cheating, it's certainly not playing football in the spirit of the game. Time wasting comes in many forms, from goalkeepers becoming unable to decide where to aim their goal kick, or players becoming unable to decide where to aim their throw in or free kick, to players feigning injury at the slightest touch, and slowly walking off when substituted. All of which are very frustrating, however feigning injury has to be the lowest form of time wasting, and is technically cheating, as it could also trick a referee into unfairly booking a player. Where is the pride in feeling you have to try and con the referee in order to beat the opposition? Then again, people don't play for pride now, they play for money, and winning increases their chances of making more money.

Can anything be done? Simply put, yes. They already have a 25 second shot clock between points in tennis, to prevent certain players from bouncing the ball endless times or taking too long pulling their shorts from their butt crack before serving. Therefore surely they could do the same with goal kicks, free kicks, substitutions, throw ins, and corners, in an effort to make sure the game keeps flowing. Regarding players wasting time feigning injury, surely the best way to stop this would be to stop the clock when a player is injured, then there would be no point rolling around the grass pretending you're in pain if no time is being wasted.

Simulation in football is when a player dives to the ground when tackled in an attempt to gain an unfair advantage by manipulating the referee into thinking a foul has been committed. This is one of the lowest forms of cheating as it can result in penalties being unfairly awarded, players being unfairly booked or sent off, and free kicks being unfairly awarded, and some of these are real game changing decisions the referee has to make. These days we have VAR to help referee's make difficult decisions, however we all know even the VAR officials judgements are far from being spot on all the time.

The problem faced in trying to stamp simulation out of the game is that even ex professionals turned football pundits often term simulation as something like "making sure the referee gives the foul", which implies the player needs to help the official to make the right decision. The referee has an extremely difficult job to try and see every little thing going on in a fast paced game. Surely if the players want to help them make the right decisions, the best thing they can do is not confuse situations by introducing the variable of whether there was simulation or not. A little honesty would go a long way to making the referee's job a lot easier.

Can anything be done? Well currently referee's have the power to issue a yellow card for simulation, however it doesn't happen as often as it should. The problem is officials are so obsessed with whether the tackle was actually a foul or not, they are forgetting about whether there was simulation from the player being tackled. After all, it is still possible that a player can be victim of a foul tackle but then still completely over-exaggerate how they go down, with a nice arch of the back, maybe a mid-air spin, a few rolls on the floor, and even a scream of pain for full dramatic effect.

So really, in terms of what can be done, it's all down to referee's doing their job better and booking players whenever there is simulation, even if the player was victim of a clear foul as it's still simulation if the player has over-exaggerated how they fall to the ground. Referee's need to recognise that simulation is not dependant on whether a tackle is a foul of not, the only thing simulation is dependant on is the players choice to be honest or not.

Shirt pulling is a fairly common form of cheating, which is done with the aim of halting of hindering the opposition players progress going forward. There are a variety of levels when it comes to shirt pulling, from a blatant pull to a very slight and subtle tug. Usually in dangerous situations like a fast counter attack, a shirt is given an almighty tug in order to prevent a goalscoring opportunity arising, and will even occasionally be strong enough to pull the player to the ground. This is easy for the referee to spot and appropriately punish with a yellow card.

The problem comes though when little pulls of the shirt are done, out of the view of the referee in order to put the opposing player slightly off balance and therefore hinder his progression forward. The clever aspect to this kind of shirt pull is that, although it hinders a players progression, the pull is too slight for a player to go down without looking like he's simulated a dive. These subtle shirt pulls are still cheating and should receive a yellow card, but they are incredibly difficult to spot, and therefore punish.

Can anything be done? Unfortunately very little can be done about this on top of what is already being done, as even the best referee's can't spot everything going on. Yellow cards are currently given if an official spots shirt pulling, but the only way to punish every single shirt pull and stamp it out of the game completely would be retrospective punishments, but surely that would be a step too far wouldn't it? Imagine if officials watched back the game looking for every subtle shirt pull, it's likely to think every player will have carried out at least two shirt pulls during the match, which would mean two yellow cards for every player in the game, and both starting XI's banned for the next game. Yes this would eventually stop shirt pulling, but is it really worth it?

A tactical foul is also know as a professional foul, and is when a player commits a clear and obvious foul in order to stop play and therefore halt the forward progression of the opposing team. Sometimes players are simply happy to accept the punishment currently being issued for such a foul (a yellow card) in order to prevent a clear goal scoring opportunity. This is clear cheating as no attempt is being made to tackle fairly and get the ball, instead the sole purpose it to prevent the opposition from being able to continue their passage of play. This is sometimes known as "taking one for the team", where the player is willing to accept the individual punishment for the benefit of the team. Possibly the lowest example of this was in extra time of a 2010 World Cup quarter final between Uruguay and Ghana. Controversial Uruguayan forward Luis Suárez deliberately handled the ball in the penalty area in order to prevent a potentially game-winning goal for Ghana. Suárez was given a red card, however Asamoah Gyan missed the resulting penalty kick for Ghana. Uruguay cruelly went on to win the match 4-2 via a penalty shootout. Suárez later stated "I made the best save of the tournament".

Can anything be done? Unfortunately as with shirt pulling, very little can be done about tactical fouls on top of what is already being done. There is no issue with officials not being able to spot them as they are clear and obvious fouls, however are the punishments strong enough to prevent them from happening. Currently the players believe the punishment is worth taking in order to stop the opposition from having a goal scoring opportunity. Players also know that if the foul is committed early enough in the passage of play that it won't be classed as a clear and obvious goal scoring opportunity and therefore are more likely to receive a yellow card than a red card. You will notice that the last defender will often try to fairly tackle the attacker as a red card is likely for a foul, however if the counter attack is in it's early stages a player will happily take another player out as they know only a yellow card will be given. This seems somewhat unfair that a likely fair attempt at tackling will be punished more than a blatantly unfair tackle purely because of where the tackle is on the pitch. Maybe the punishment should reflect more the intentions of the player committing the foul rather than the affect is has on play. This way, if players knew a tactical foul would be given a red card regardless of pitch position, then players would be more likely to try and tackle fairly all the time.

You will notice when subtle cheating does happen, no sports pages and websites will mention it, and how it influenced the outcome, it is now sadly just a given, and we have to deal with it. However, in an age where we are chalking off brilliant goals because a player's nose was offside, what seems more ludicrous to you? Cheating in football has become acceptable, however it doesn't have to be this way, it just requires some gutsy calls to make the game we all love be played in the spirit all sport should be played, fairly and honestly.