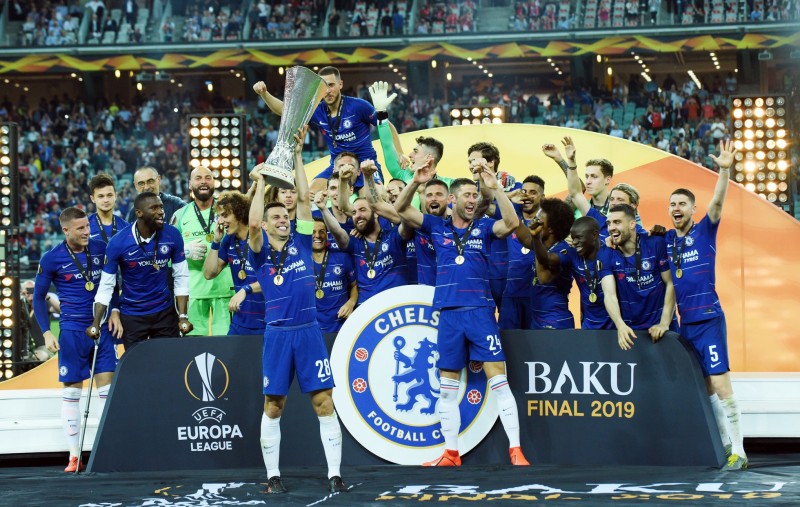 We'll start with the Europa League Final, not because it's more significant than the Champions League Final, because it isn't, however it's pretty much impossible to find a royalty free photo of the 2019 Champions League Final. Chelsea beat Arsenal 4-1 in what was a one sided game although the first half ended 0-0 and was close. Once Chelsea went into 2nd gear though Arsenal were simply not equipped to deal with them, and a lot of credit needs to be handed to Maurizio Sarri who knew what to say in the dressing room at half time. Eden Hazard who will be joining Real Madrid went out on a career Chelsea high by scoring a brace and holding aloft the very beautiful Europa League trophy, formally the UEFA Cup.

As the celebrations from Chelsea went on, Arsenal manager Unai Emery's face said it all, as he looked genuinely distraught. Perhaps there was the realisation that this Arsenal side just can't cut it at the very top. The power shift at the club seemed to change when they changed stadiums. It went from a team that could go the whole season unbeaten to one that seemed happy to finish in 4th place and pick up the odd FA Cup win along the way.

Emery needs to be given funds, but Arsenal have traditionally never spent the money that Emery will be hoping for. There is also the case of Mesut Ozil who has looked a shadow of the player that was once relied on to hold midfield for both Real Madrid and the German national team. In the Europa League final he looked poor, actually it was worse than that, he looked disinterested. Ozil needs to leave the club and the club need him to leave. His high wages may make that an obstacle, but both parties cannot work with each other any more.

Of course it's unfair to use Ozil as a scapegoat because the truth is a lack of budget compared to what other teams in the Premier League can spend and a lack of winning mentality are really to blame for Arsenal's current state. It will be fascinating to see who Emery will be able to bring into the club in the summer, and what restrictions he will have to face under the board.

1st of many for Klopp and Liverpool?

Jurgen Klopp's beaming smile will remain an image engrained in the memory banks after he finally won his first trophy with Liverpool after four seasons, and what a trophy to break your duck, the Champions League.

Liverpool beat Tottenham 2-0 in a final, which in all fairness was a dull affair. Forget the attacking minded presence of two teams; what we witnessed was both sides afraid to lose in what was only the 2nd ever all English Champions League final.

While the football was not pretty on the eye, you could kind of understand why both teams were cautious. Klopp going for his first Liverpool trophy had a terrible record of losing in finals. He had already lost last seasons Champions League final against Real Madrid, and a few seasons ago lost in the Europa League final against Sevilla. Going back further, he had also lost another Champions League final when manager of Borussia Dortmund in 2013, so there was a lot of pain.

As for Tottenham after the highs of knocking out Manchester City and Ajax there was almost a feeling that the club were just happy to be here. Unfortunately that was led by manager Mauricio Pochettino and seemed to spread throughout the team. It could be one of the reasons that the game just seemed to pass them by. While Spurs did not play well, they did create some genuine chances in the second half, and arguably the better chances of the two sides. However, they seemed too slow in their build up play. Where was all the free flowing attacking football we had witnessed in the quarterfinals and semis?

There was also the odd choice from Pochettino to start with Harry Kane up front. A penny for your thoughts Mr. Lucas Moura whose hat-trick against Ajax had sent Tottenham to their first ever final, and yet he was benched in favour of the returning Kane from an almost two month injury lay off.

True Kane is a brilliant centre forward and scores goals, but surely coming back into a massive game as the Champions League final made little sense. Starting from the bench and possibly coming on in the final stages would have made more sense. Kane's performance in the final was shocking, and he simply wasn't 100% ready to play in such an important match. Whilst one could argue that Spurs do not revolve around Kane they still had a player on the pitch who wasn't able to make an impact for 90 minutes. The decision to choose Kane simply played into Liverpool's hands.

As for the opening goal which was decided after the first 30 seconds but not converted until the 2nd minute, well that could warrant a chapter all by its own. Liverpool were awarded a penalty when Tottenham defender Moussa Sissoko was adjudged to have handled the ball. However the ball came off of his chest and then onto his outstretched arm, which was in that position to tell his defenders to track back, obvious by the way he's pointing his finger in a specific direction. Well that was one way of looking at it, with the officials and VAR deciding that Sissoko actually meant to block the ball that way, the decision seemed incredibly harsh and lacking any level of common sense. This is not the first time VAR handball decisions have seemed to lack common sense, which could present an opportunity for attackers to look for arms (in potentially unnatural positions) with their shots instead of the goal when in the 18-yard box. It's clear the rules need changing, and sooner rather than later.

After such an early goal went in Tottenham's match tactics were all out the window and they suddenly looked like the rookie team that we all thought they might be on such a high stage. However Liverpool did little to try and increase their lead, and the rest of the half was a dull affair.

The match did liven up somewhat in the second half with both sides creating chances and the threat loomed for Liverpool that Tottenham only needed one goal to get back into the game. Alas what really won Liverpool their 6th European Cup was their back four and goalkeeper Alisson. The Brazilian shot stopper pulled off a succession of saves and has been worth every penny of his near £70m astronomical fee. Virgil van Dijk was also superb winning man of the match, and most times Tottenham came forward they could not find a way past the back four, and when they did they had Alisson waiting for them.

When Divock Origi who came on as a sub scored the winner with three minutes to go it all felt quite inevitable and Liverpool were crowned Champions League winners moments after.

Can Liverpool reach a 3rd final in a row and win back-to-back Champions Leagues? They are priced up at 7.50 to do so. Tottenham are 17.00 and the favourites at this time are Manchester City at 6.00.

Two final things, both farewells and both Arsenal related. The first is Petr Cech who played his final career game in the Europa League final. Mostly known for his time at Chelsea it was sheer irony that he would play his last game against them. He will now return to Chelsea as a goalkeeping coach having played an incredible 781 club matches.

Then there is a permanent farewell to Jose Antonio Reyes who tragically died aged just 35 after a car crash on the morning of the Champions League final. Reyes played 110 games for The Gunners scoring 23 goals and was part of the team that went a season unbeaten in 2003/04. His best years were for Sevilla where he won 3 Europa Leagues and won 5 altogether.